The holiday’s over and I’m back at work but have now managed to find time for this post. The Ledbury weekend started on Friday and I attended the Eric Gregory Award and National Poetry Competition Winners readings – the 2016 comp is open for entries!

At 6pm, Heath was launched – this collaboration between Penelope Shuttle and John Greening is described as “a wild chorus of poems written in call and response across Hounslow Heath.” I introduced Jane Commane, of the publisher Nine Arches, who introduced the poets. They gave a spellbinding reading and ended with a brief Q&A – the joy they had working together was evident.

There are a number of good restaurants in Ledbury that I like to go to each year and on Fri evening it was the Italian turn. Joolz and I were joined by Robert Harper, Jane Commane and Sarah Howe. Afterwards, we walked it off by climbing the hill behind the church, also with Dom Bury. It was quite steep and I struggled with my breath (still a bit poorly) but there was a great view over the town. 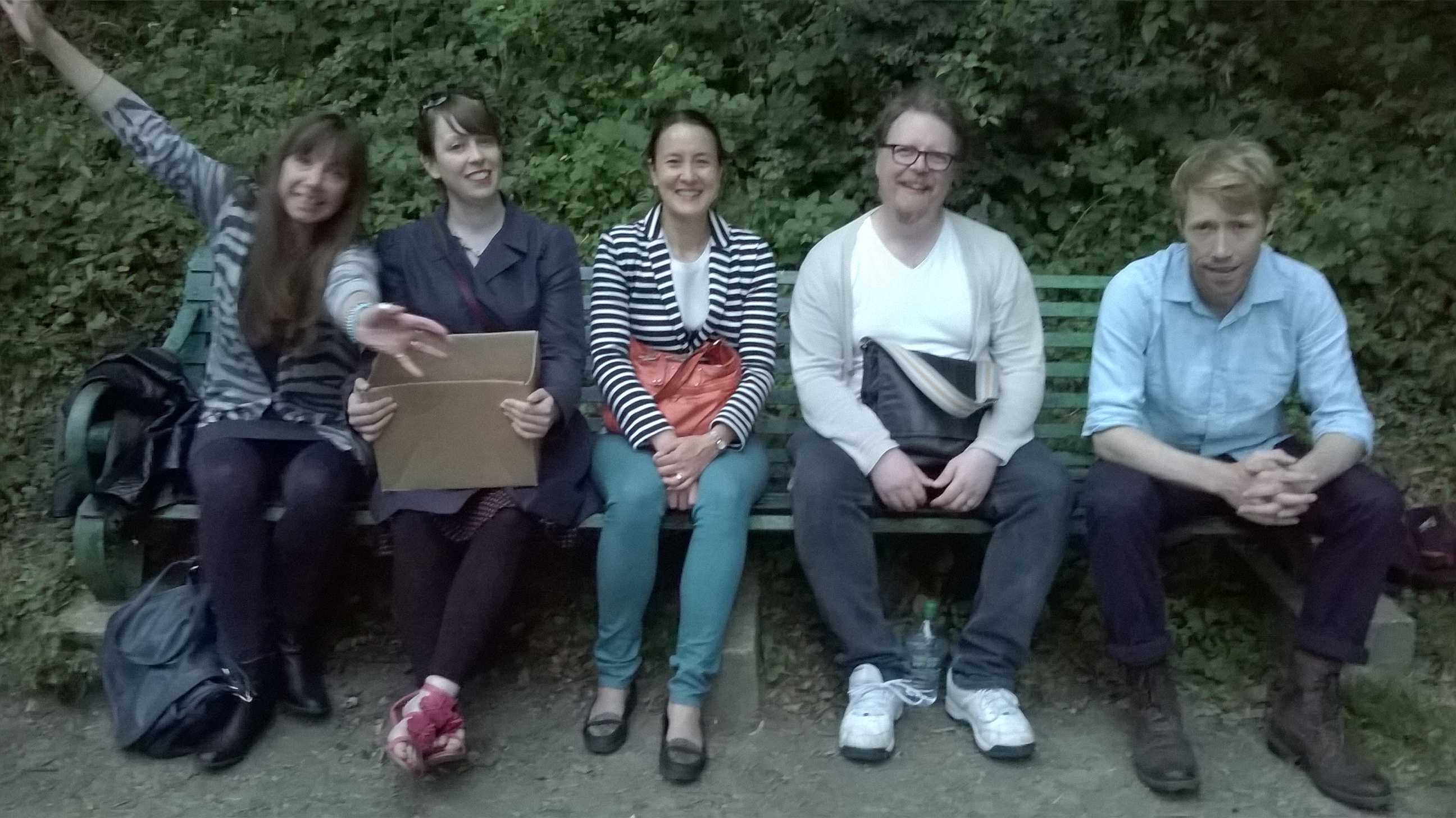 I mostly mooched about on Saturday before heading to the Community Hall for the arrival of Little Machine. I was event managing the gala evening with them, Carol Ann Duffy and John Sampson. Carol Ann was on cracking form, starting with some of The World’s Wife and John accompanied and interspersed her poems with music from various horns and pipes!

LiTTLe MACHiNe set famous poems to music, with slides showing the text and appropriate pictures. I’m a big fan – they live locally to me in South London and are currently on tour with Roger McGough. On Sat, they started with a medieval poem and spanned the ages to the present day, with a poem by Carol Ann (of course) and one by Liz Lochhead, who was also in the audience.

I hauled myself out of bed far too early on Sunday after ending Sat in the Prince of Wales with a bunch of poets, but was happy to go and support Joolz in her 20 Mins With… The Panelled Room was full of friendly faces as she read a set, some of which was written specifically for the event. It’s the 20th anniversary (china!) of the festival and she read some poems off plates and cups! 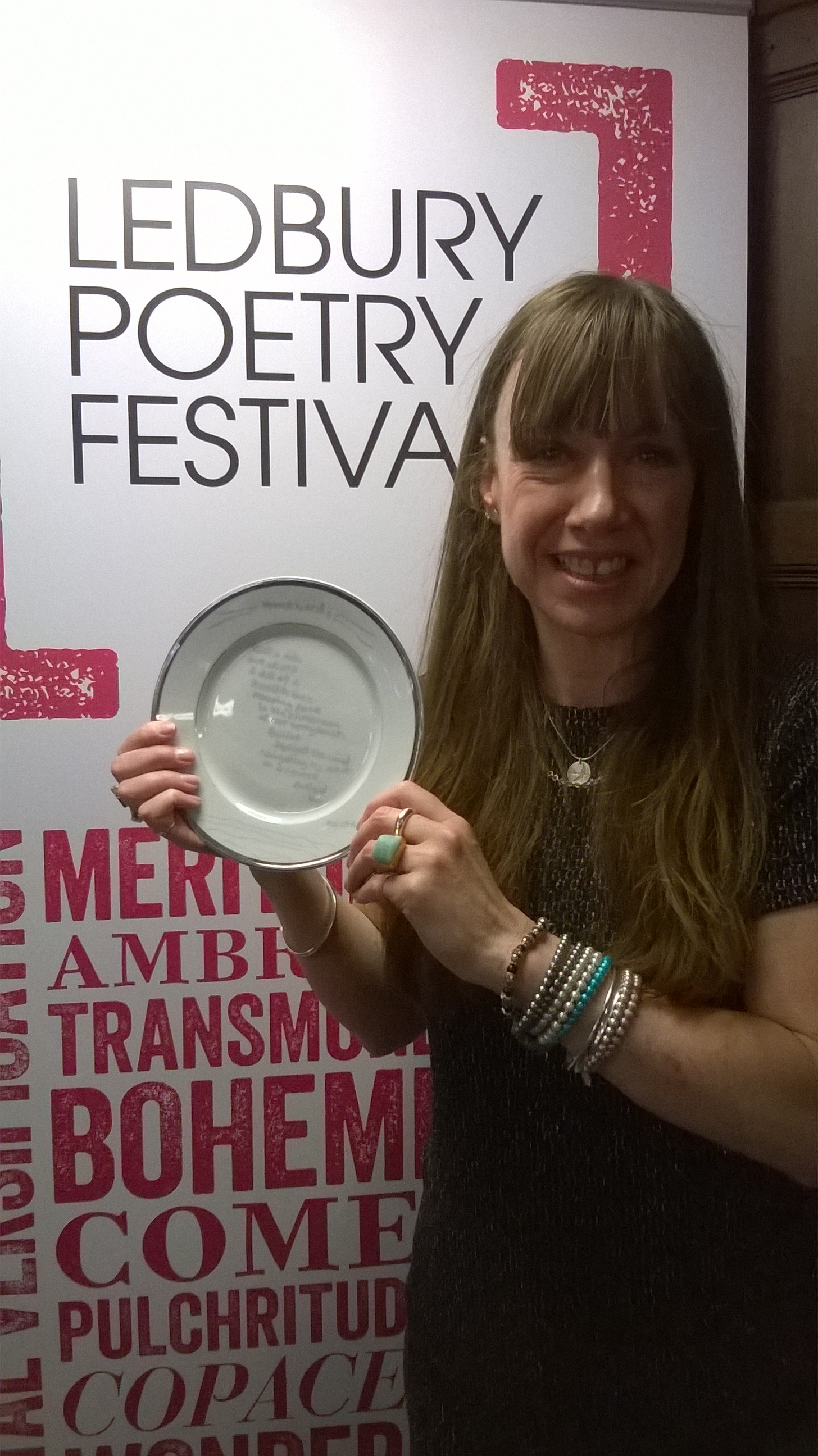 I also went to 20 Mins with Derryn Rees Jones, talking about being the editor of Pavilion Press, then with Ruby Robinson, a Pavilion poet who has been nominated for the Forward Prize for best first collection. Maybe Pavilion will get the double – Mona Arshi’s Small Hands, which won that prize last year, is published by them too.

The last event I managed was a reading by Katrina Naomi and Sarah Howe. Katrina used to live close to me and I’ve missed her since she moved to Penzance so it was great to see her and hear her read from her new book, The Way the Crocodile Taught Me (Seren). Sarah read from her TS Eliot prize winning Loop Of Jade (Chatto) – the first debut collection to win – as well as new work, I always find it exciting to hear fresh poems.

I was full of poems by then so went to the Ledbury Celebration and listened to some music with a glass of prosecco, then sat on the sofa in the lane, catching some sun, and hearing the blues band playing in the nearby pub. The picture below, of Joolz and me in the lane, was taken earlier in the day by box office supremo, John Rose. 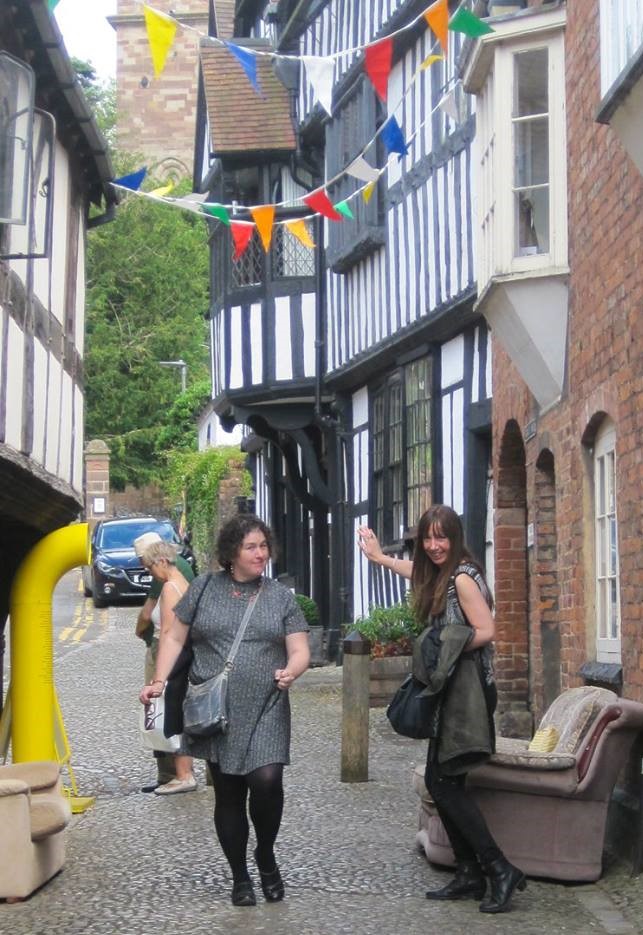 I could barely stand for the volunteers party after the end of the festival, but somehow I managed! And I had a good converation with the director, Chloe Garner, about some ideas for next year…